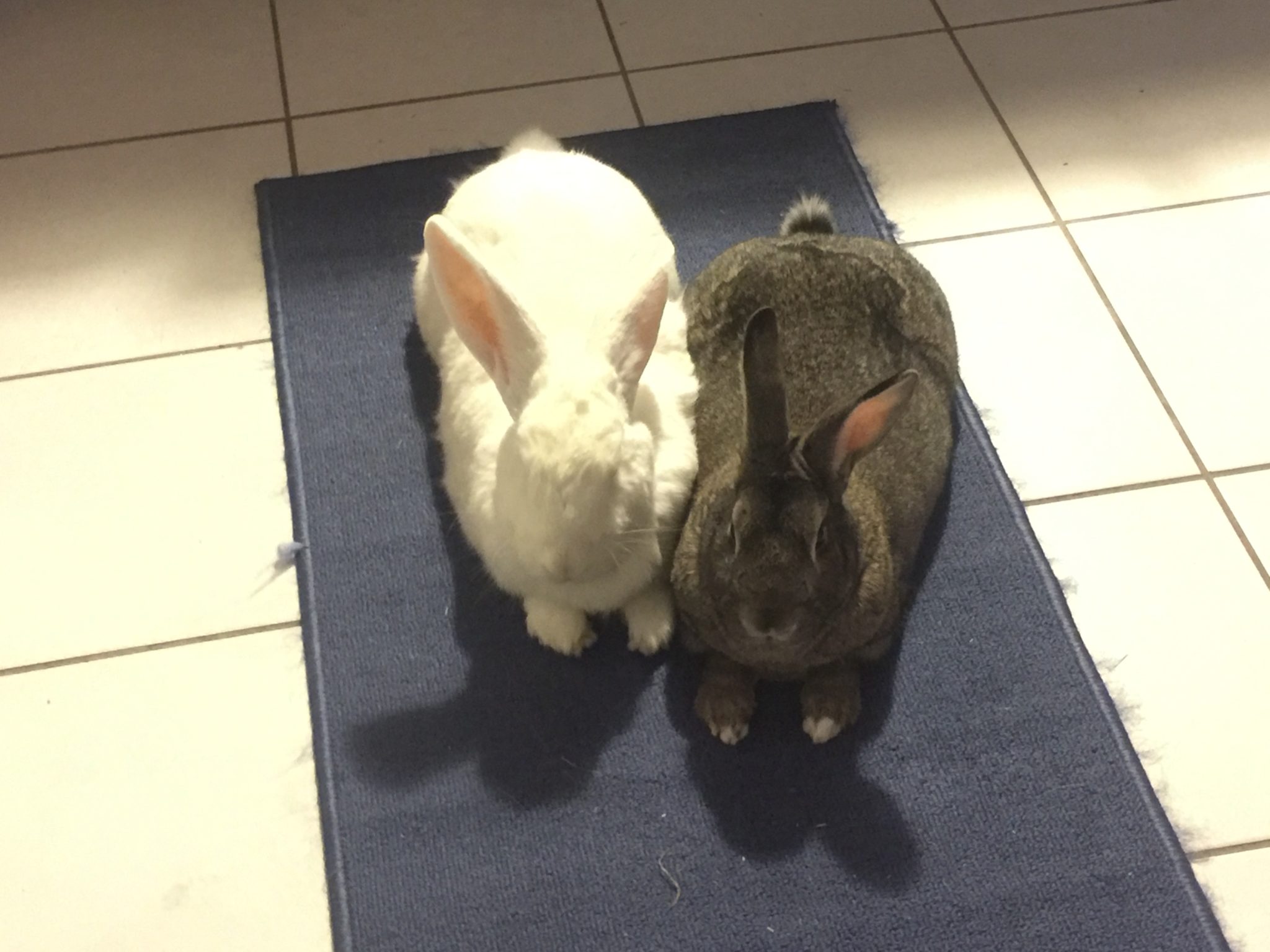 The story of Petey written by his wonderful adopter

We adopted Petey (formerly Angel) in May 2017. He is the most amazing little guy and we are very grateful to Vivian and Julie bringing us together. We adopted Petey to bond with our Gracie who is our first bunny and the love of our lives. First, some background on Gracie…

Gracie was from a horrible situation at my job. A supervisor bought Gracie from a livestock market with the intentions of feeding her to a huge snake they kept in the main office. He tried to beat her unconscious and put her in the tank with the snake where she was attacked. The snake bit her on one of her rear feet and drew quite a bit of blood. It then proceeded to wrap around her to render her unconscious. She was too large for the snake to eat so he never even attempted it. They thought she was dead so they removed her from the tank and put her in an empty one. All of this abuse she endured happened on the overnight shift. I came into work in the morning to see this beautiful New Zealand white rabbit sitting in an empty fish tank, catatonic. Some of the people there watched the whole thing happen and even filmed it!!…horrifying!

So, I hid Gracie in a supply area to keep her away from the evil man that did this and talked my wife into bringing her home. The poor little girl was so sick. She wouldn’t eat, had diarrhea and was extremely weak. Over the course of a few weeks, we got Gracie back to eating and on the mend. We then had her spayed. It cost us a small fortune but it was the most gratifying experience of our lives.

Soon we decided to get a partner for Gracie. We adopted a male named Trixie from a friend who didn’t have time to care for him anymore. We successfully bonded Gracie and Trixie. They were inseparable and adorable to watch. Unfortunately, all of our hearts would be broken 5 months later. Trixie fell ill and was diagnosed with a large bladder stone stuck in his urethra. They attempted surgery but weren’t successful and Trixie passed away shortly after the surgery. We were crushed, and so was Gracie. We knew we had to find Gracie another partner as she was sulking and visibly depressed. Thank goodness she kept eating but her grief was so obvious. Around a month later, our little Petey enters.️

Petey and Gracie bonded over the course of a couple of months and we couldn’t be happier. His personality has blossomed. When we first adopted Petey, he was a bit skittish. He would let you pet him for only short periods of time. Now he’s a complete snuggle bug! Petey has such beautiful distinct colorings and we cannot get over how unique he is. He has some reddish hair on the back of his neck that we love and his whole underside is snow white!! He is a beautiful little boy inside and out and we love him too much for words. He and Gracie bring us endless joy.  We are grateful to have our Petey and we owe it all to All About Rabbits Rescue. Petey was an angel for Gracie..and for us. No surprise that was his previous name.